News and views from iELT and friends

Oxford TEFL Director Duncan Foord will be presenting the Pre-Conference Training Session ‘Exploring Group Dynamics’ at the upcoming InnovateELT conference. In this blog post he reflects on what group dynamics is and explores case studies which highlight the challenges teachers face.

It will come as no surprise to readers with experience working on Intensive pre-service training courses that not all groups are equally happy and productive. What has puzzled us at Oxford TEFL, Barcelona is the random nature of this. We run intensive 4 week CertTESOL courses throughout the year and can get very different responses from one month to the next. Same course, same place, same tutors.

The same thing happens as we know with language courses. Teachers will often report that they have two ostensibly similar groups of students, same level, same materials but with completely different outcomes in terms of class atmosphere and speed of progress.

“Group dynamics” is the explanation we tend to apply to these puzzles, but I would like in this post to unpack a little what we mean by group dynamics and argue that it is an aspect of language teaching and teacher training that we might usefully attend to more.

In less successful trainee teacher groups there are typically more conflicts between trainees and more complaints about the tutors and the course itself, more anxiety and panic and probably poorer outcomes in terms of final results.
We recently had a group like this at Oxford TEFL and in the inevitable and of course post mortem, those of us involved i tutoring and assessing on the course came up with the following reflections:

“There were some awkward characters in the group, a bad apple or two”. “There was a clash of personalities”.”They were a moany group”. “They were a weak group” “The weather was bad that month”.

This type of reflection might have helped us feel a bit better, but suggests we are somewhat lacking as a team (and as a profession perhaps) in an understanding of group dynamics. When a problem is language or methodology related, the discourse of reflection is usually much more confident. “She was unable to grade language effectively”, “there was no opportunity for students to use the language in a communicative activity”, “he needs to concept check new vocabulary” etc.

Our value proposition to trainee teachers and to language learners when we sell them a course is to improve their teaching/English language skills in a class or group. That is what they pay for. As trainers or teachers, our ability to make the group work as well as possible can be as important as our ability to understand language and methodology. If we can get better at understanding group dynamics our trainee teachers and students might get better results, or at the very least have a better understanding of how the group dynamic is affecting their learning. The awkward group members might channel their energy positive goals, personality clashes might become celebrations of diversity, moaning may turn into constructive feedback and so on. 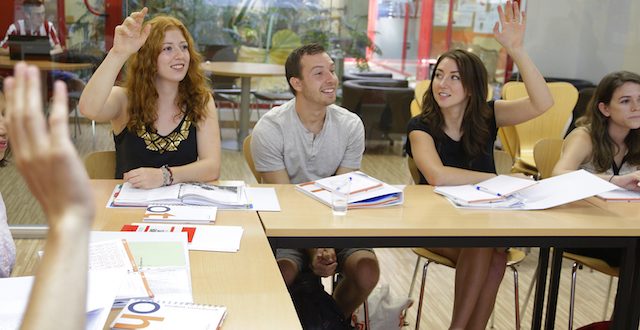 Google ”group dynamics” and you will find some useful articles which give an overview of key issues. Worth also googling “conflict management” while you are at it, as the two areas tend to overlap. Here is an example of a group dynamic/conflict issue from a CELTA course at OxfordTEFL, Barcelona

How would you have approached the situation as a tutor on the course, or as a fellow trainee in the group? Should the conflict be resolved between the participants privately or publicly, with or without a tutor’s intervention? Can the conflict be used to strengthen the group? What could the course provider have done, if anything, to minimize the likelihood of this type of conflict occurring, if indeed that is desirable?

“Group Dynamics in ELT” by Zoltan Dornyei and Tim Murphy (CUP 2003) is an excellent guide to discovering the answers to these types of question. It makes an excellent basis for discussion with your team on strategies and approaches to improving group dynamics.

For example, substantial research suggests that groups move through similar stages. Formation, transition, performing and dissolution. Dornyei and Murphy write in some detail about these stages and how they might be managed. Many teachers will be familiar with Jill Hadfield’s Classroom Dynamics (OUP 1992) which contains many activities focused on facilitating team building and ice breaking, especially in the formation stage..Interestingly the transition and performing stages are where groups are more likely to go to the dark side, according to Dornyei and Murphy so activities may need revisiting periodically and others introduced.

Here is an example of group conflict in an English class from Oxford House Barcelona:

A group of four students complained to reception about 2 extra students added later to the group. The teacher responded explaining school policy was that students could be added to a maximum of 8 students. One student made a written complaint but refused to discuss the matter when approached by the Director of Studies.

What happened here I wonder? If the teacher and school administration understood more about how and why these stages work and possible interventions we can make at each point, is there a chance we might have avoided this situation and others like it?

Not just inside the classroom

Group dynamics affects teachers outside class too, most notably in the staffroom or in micro teams (such as a team of CELTA course trainers or a team of YL teachers). Group dynamics in the staffroom can have a powerful effect on the teaching lives of the group members, newly qualified and experienced. To what extent would you consider your staff room to be cohesive and productive? How is the group dynamic of your staffroom managed, beyond the annual barbecue booze up? And beyond team building, what is the role of leadership, environment and conflict management?

If you would like to explore group dynamics further, join us for the InnovateELT Pre-Conference Sessions at Oxford House, Barcelona on May 11th.

Duncan is the Director of OxfordTEFL, teacher training and language schools in Barcelona and Prague. He is author of The Developing Teacher (DELTA Publishing), and co-author, with Lindsay Clandfield, of The Language Teacher’s Survival Handbook (iT’s Magazines), and From English Teacher to Learner Coach, with Daniel Barber.